Flown to the moon: A unique Omega Speedmaster

A watch that accompanied Captain Ron Evans, one of only 24 people to have flown to the Moon, aboard Apollo 17 — a unique opportunity for collectors to own a flown Speedmaster from the Apollo missions 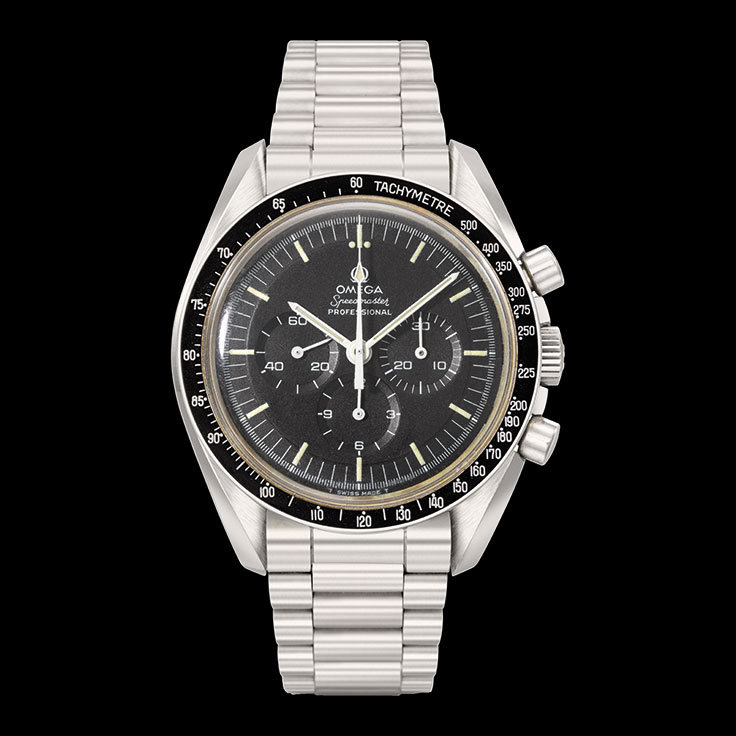 Omega. An exceptional, highly attractive and historically important Apollo 17 privately flown stainless steel chronograph wristwatch and flown metal attachment from the personal collection of astronaut Ron Evans. Certified and signed. Manufactured in 1970. Estimate on request. This lot is offered in the Omega Speedmaster 50 sale on 15 December at Christie’s New York

Captain Ron Evans was one of 19 astronauts specially selected by NASA in April 1966 as part of ‘Astronaut Group 5’. Evans was serving in the U.S. Navy in the Pacific at the time, flying fighter aircraft in Vietnam combat operations from the aircraft carrier U.S.S. Ticonderoga.

Born in Kansas in 1933, Ronald E. Evans received a Bachelor of Science degree in Electrical Engineering from the University of Kansas before joining the U.S. Navy. Between 1961 and 1962 he served as a combat flight instructor, and went on to earn a Master of Science degree in Aeronautical Engineering from the U.S. Naval Postgraduate School in 1964.

After being selected as member of the astronaut support crews for the Apollo 7 and Apollo 11 missions, and as backup command module pilot for Apollo 14, Evans made his first journey into space during Apollo 17, which launched on 7 December 1972. He was chosen as command module pilot, alongside crewmates Commander Eugene Cernan, who was making his third and final spaceflight, and Lunar Module Pilot Harrison H Schmitt, who became the first scientist to fly in space.

As the last scheduled manned mission to the Moon, Apollo 17 broke several records set by previous fights, including longest manned lunar landing flight, largest lunar sample return, and longest time in lunar orbit. In addition, important tests were undertaken for the continued development of space processing, which exploits the unique environment of a space laboratory to research, develop, and manufacture products.

Among these tests was one named ‘Apollo 17 Heat Flow and Convection Experiments’, which was carried out by Evans while on his way to the Moon, using the watch offered here, along with the metal part it was attached to. Given that all other known Speedmaster watches flown in space during the Apollo missions are property of NASA, this watch offers collectors the only opportunity to own a flown Speedmaster from the Apollo missions. 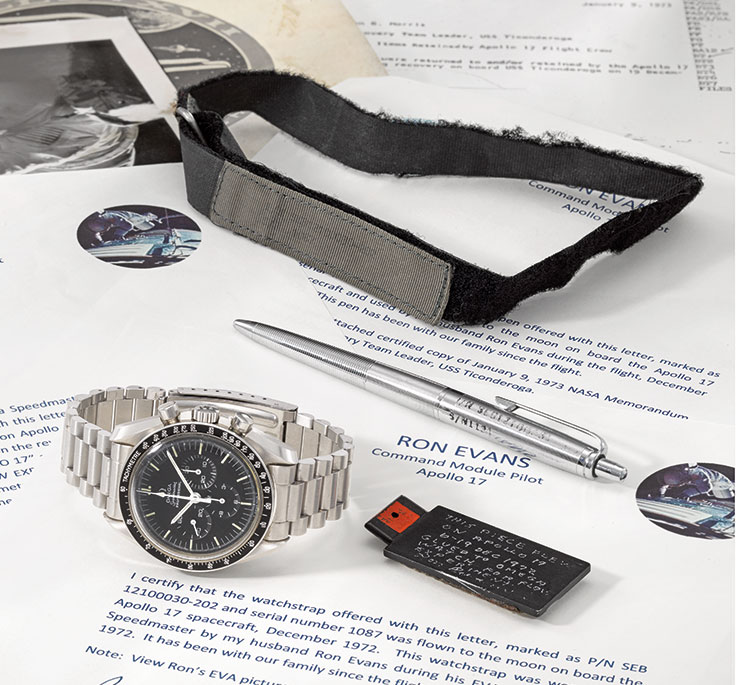 The historically important Apollo 17 privately flown stainless steel Omega Speedmaster chronograph wristwatch from the personal collection of astronaut Ron Evans, alongside other elements included in this lot, such as the strap, the flown metal attachment used during the experiments, Apollo 17-flown Fisher AG 7 space pen, photographs and letters of verification. This lot is offered in the Omega Speedmaster 50 sale on 15 December at Christie’s New York

Cernan and Schmitt landed on the Moon in the Taurus-Littrow Valley shortly before 3pm EST on 11 December, before spending just over three days on the lunar surface. Above them in the Command/Service module, Evans would set a record for the time he spent alone in lunar orbit.

One of the most exciting discoveries of Cernan and Schmitt’s time on the Moon’s surface took place on day two of exploration. Nearly 9 km away from the Lunar Module, they came towards a crater that they named Shorty, in which they found an unusual and surprising orange soil literally underneath their feet.

Noticeable against the grey debris from the surface that surrounded it, it was later discovered that the orange soil was titanium-rich pyroclastic glass believed to have been deposited billions of years ago. This ultimately proved that the valley had previously witnessed a large eruptive fire.

On December 14, the spacecraft began its descent back home to Earth. Before the astronauts began their return, however, Cernan and Schmitt left behind a plaque engraved with the signatures of the three astronauts and President Richard Nixon. It read: ‘Here man completed his first explorations of the Moon December 1972, AD. May the spirit of peace in which we came be reflected in the lives of all mankind.’

During the trip home, Evans had to retrieve film canisters from cameras mounted in the equipment bay at the rear of the spacecraft. To do this he was required to perform a spacewalk that lasted for one hour and six minutes, the last ever conducted in deep space. An original black and white photo released by NASA on 27 December 1972 shows Ron Evans wearing the watch strap offered with this lot on his left arm while working outside the spacecraft. This is also a unique opportunity to own one of the NASA-issued velcro straps used during the Apollo missions, as others were returned to NASA.

After 301 hours and 51 minutes in space, Evans and his crewmates returned to Earth on 19 December 1972. The Command Module landed in the Pacific Ocean, some four miles from the designated the recovery ship — the U.S.S. Ticonderoga, the aircraft carrier on which Evans had served four tours of duty. Fifty-two minutes after landing, Evans, Cernan and Schmitt were safely on board, having been retrieved by a recovery helicopter.

Once back on terra firma, Ron Evans took a portable hand engraving tool and inscribed the Speedmaster watch shown here, and the black metal attachment used in the experiment. On the reverse of the watch, he etched ‘FLOWN IN C.S.M. TO THE MOON’ and ‘APOLLO 17’ and his signature. On the edge of the watch he engraved ‘HEAT FLOW EXPR’ and ‘6-19 DEC 1972’. In addition, he etched directly on the metal piece that it was ‘glued to OMEGA watch’ for the experiment.

Evans went on to serve as backup command module pilot for the Apollo-Soyuz Test Project, which joined the United States and Soviet Union in an orbital mission, before retiring from the United States Navy on in 1976 after 21 years of service. He remained active for NASA’s Space Shuttle Program and as a NASA astronaut, and was a member of the operations and training group within the astronaut office that was responsible for launch and ascent phases.

He eventually retired from NASA in March 1977 and became a coal industry executive. As a distinguished astronaut and aviator, he was presented with a number of awards including the NASA Distinguished Service Medal in 1973, the Johnson Space Center Superior Achievement Award in 1970, the Navy Distinguished Service Medal in 1973, the Vietnam Service Medal, and the Navy Commendation Medal with combat distinguishing service in 1966. In 1983, Evans was inducted into the International Space Hall of Fame. He passed away in April 1990 at 56 years of age. Seven years later, Ronald Evans was inducted into the U.S. Astronaut Hall of Fame.

The watch offered in the sale is accompanied with signed letters from Jan Evans (Ron’s wife) certifying that the stainless steel OMEGA Speedmaster, the watch strap and the small black metal piece were flown to the Moon and used by her husband on Apollo 17 in December 1972; a colour photograph of the OMEGA Speedmaster fixed on the heat experimental equipment; an original black and white photo signed on the back by Ron Evans of his EVA on December 17 1972; and a colour version of the same image.

Additionally, the watch is accompanied by the Apollo 17-flown Fisher AG 7 space pen from the personal collection of astronaut Ron Evans. It is marked with the NASA numbers SEB 12100051-204 and SN 1131. This pen was specially designed by Paul C. Fisher (Fisher Pen Company) for NASA and could be used in any position, on any surface, underwater or in conditions of weightlessness thanks to its pressurised ink. It, too, is accompanied with a letter from Jan Evans.

As a commemorative gesture to a number of NASA astronauts following the successful Apollo 11 mission, OMEGA produced a special limited edition wristwatch with a solid 18k gold dial, case, and bracelet. The watches are only produced in 1,014 examples, where 26, numbered 3 to 28, were offered at an astronaut banquet in Houston on November 25, 1969.

The appreciation dinner was attended by astronauts that were on duty at the time, and three watches were awarded posthumously to the crew of Apollo 1. Solely for the astronauts’ special timepieces, the case backs were engraved: ‘to mark man’s conquest of space and time, through time, on time’, with the name of the astronaut and his mission.

The watch above is engraved number 1007 and features this important case back, made especially for Ron Evans to commemorate his efforts on the Apollo 13 mission. Watches such as this and numbered 1001 to 1008 were presented in 1972 and 1973 to those astronauts who had not yet accomplished a space conquest in 1969, namely missions 14 to 17.