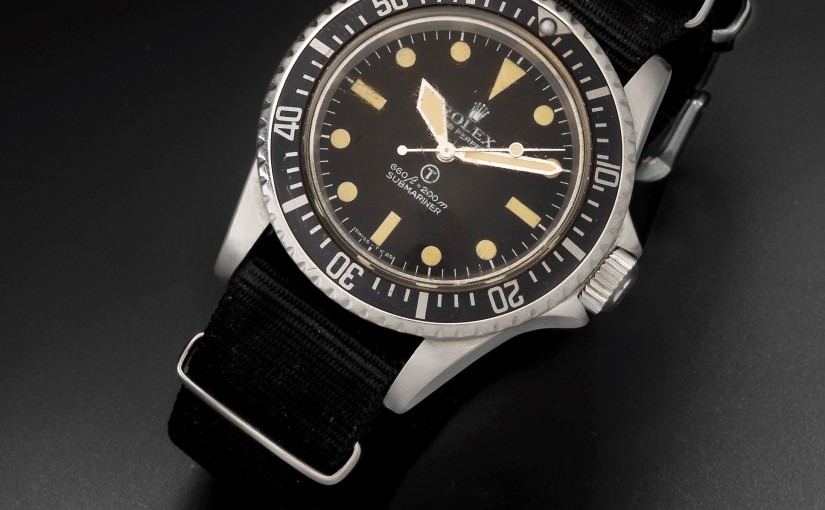 A military issue Rolex wristwatch, originally purchased for under £1,000, sold at Bonhams 16th December London Fine Watch sale for £120,100.
The vendor brought the Rolex to the Antiques Roadshow when the show came to Lincolnshire in early 2015. They were delighted when the valuers told them that the watch was worth a great deal more than originally thought.
The Rolex is remarkable because the Royal Navy ordered it in a series of watches for use by their specialist personnel. The dials are marked with the logo “Circle T”, which is the international symbol for Tritium, a treatment the watch received to help the wearer see the hands in the dark. The Rolex has now sold at Bonhams for nearly double the top estimate.

Elsewhere, the first instalment from the collection of a European Nobleman sold well, lead by the highly anticipated rectangular rose gold Glashütte tourbillon wristwatch, sold for £25,000.

A further highlight included a Rolex ref. 4767 ‘Jean-Claude Killy’ sold for £74,500. Named after three-time Olympic gold medalist, Jean-Claude Killy, the watch previously held the title of the most complicated Rolex ever made. 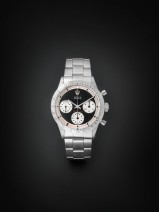 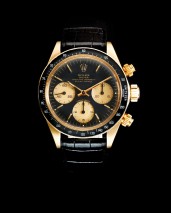 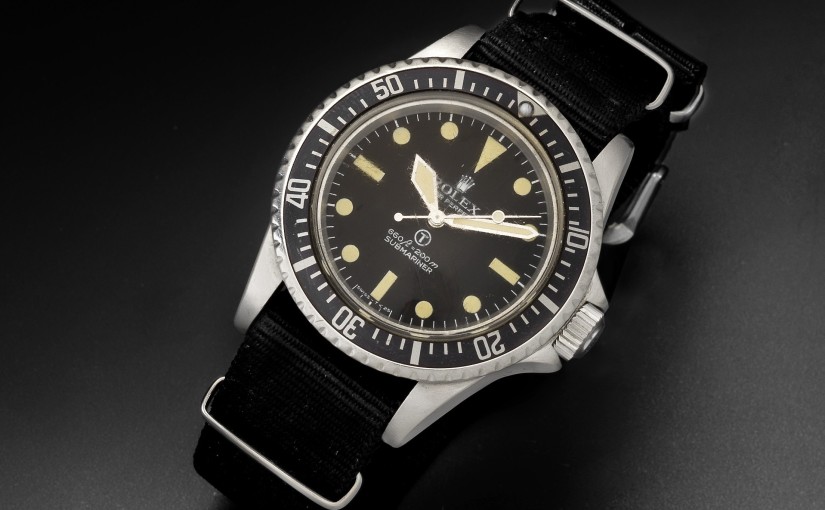 A military issue Rolex wristwatch, originally purchased for under £1,000, was recently discovered by the BBC Antiques Roadshow to be worth several times the expected amount, now valued by Bonhams at £50,000-70,000. It is offered at Bonhams Fine Watch Sale, taking place 16 December.
The vendor was first alerted to the potential value of his Rolex whilst watching an episode of BBC series, the Antiques Roadshow, when he saw a similar watch to his valued at a considerable amount more than he’d anticipated. When the Roadshow came to Lincolnshire in early 2015, the vendor took the watch along to have it valued. He was delighted to find that it was worth a great deal more than originally thought.

“After the Antiques Roadshow valuation, the vendor was very excited to bring the watch to Bonhams,” said Jonathan Darracott, Bonhams Head of Watches. “It is a rare double reference version of the Military Submariner, issued to the British Navy in the early 1970s.”

The Royal Navy ordered a series of watches from Rolex for use by their specialist personnel. These watches have fixed bar lugs and the hands are of sword shape so they are more legible under low light conditions. The dials are also marked with the “Circle T“, which is the international symbol for Tritium, a treatment the watch received to help the wearer see the hands in the dark.

The case backs are engraved on the interior with the serial number and also on the outside case back with the Ministry of Defence issue number. The wristwatch was shown on BBC Antiques Roadshow on Sunday 8 November at 8pm.
It will be sold at Bonhams Fine Watch Sale, taking place 16 December at 101 New Bond Street. 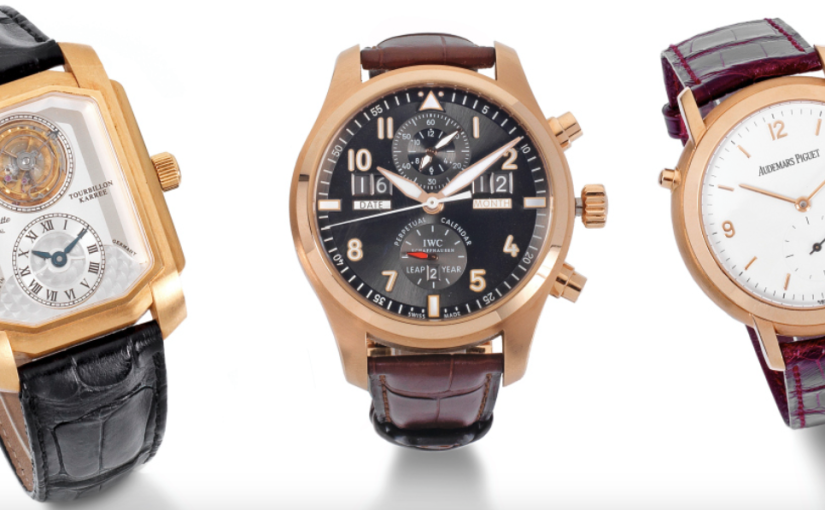 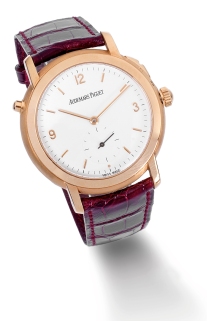 From left: a rectangular rose gold Glashütte tourbillon wristwatch, estimated at £20,000-£30,000; a rose gold IWC Spitfire Perpetual Calendar chronograph,
estimated at £12,000-£18,000; an 18K rose gold Audemars Piguet Grande and Petite sonnerie wristwatch, estimated at £40,000-60,000
Bonhams announce the sale of one of the world’s largest watch collections, containing 2,000 exceptional timepieces. The collection is owned by the late Jan Willem Frederik baron van Wassenaer of the Dutch De Van Wassenaer family, a dynasty that dates back to the 13th century. Believed to be the largest ever seen in Europe, the collection will be sold at various auctions throughout 2016, with the first instalment will feature in Bonhams Fine Watch Sale, taking place 16 December at 101 New Bond Street.
“This is one of the largest single-owner watch collections the world has ever seen. We’re delighted that Bonhams have been selected to offer the entire collection at sales throughout the coming year,” said Jonathan Darracott, Bonhams Head of Watches. “Owned by a European nobleman, they’ve been stored all around his home, with new ones still untouched in boxes, vintage ones in drawers, further pieces in the safe, and others piled up high in cupboards, or on his desk. A fantastic medley of watches, a collection consisting entirely of the things he adored”.
“What makes this collection so special is not simply its vastness, but the extraordinary variety of watches included. From the most renowned and exclusive watchmakers in the world, to independent manufacturers who produce only a few pieces per year.”
Leading the first instalment is a fine, exceptionally complicated 18K rose gold Audemars Piguet Grande and Petite sonnerie wristwatch, estimated at £40,000-60,000. Further highlights include a fine and rare rectangular rose gold Glashütte tourbillon wristwatch, estimated at £20,000-£30,000, and an oversize rare and complicated rose gold IWC Spitfire Perpetual Calendar chronograph, estimated at £12,000-£18,000.
The remainder of the collection will be sold throughout 2016.
A EUROPEAN NOBLEMAN
Jan Willem Frederik baron van Wassenaer was born in The Hague on 13 March 1933. His family, the De Van Wassenaers, are among the oldest noble families in Holland, with a heritage dating back to the year 13th century.
In his twenties, Van Wassenaer started to collect valuables such as watches, coins, stamps and antique books. He was well known for his vast knowledge of how and where to acquire antique books, old magazines, maps and other printed valuables.
For watches, his preference was only for the more traditional, and complicated, mechanical pieces with manual winding mechanism. In buying them he implored various strategies, the most notable being to purchase watches with a serial number with emotional value: 3, 13, and 33 were his favourites. He also collected special watches from particularly rare series, such as the Omega Missions Case (serial number 3/5), and the Oris Limited Edition Explorers of the World.
The series of Longines in the collection is arguably the largest private collection ever seen. When the Longines book was produced, the brand even referred to Van Wassenaer because they knew his collection to be by far the largest.
Van Wassenaer also owned a considerable collection of Alpina watches. Rumour has it that the reason for this was because his father, who died when Van Wassenaer was just 21 years old, had owned an Alpina watch which was later lost. In buying all possible Alpina watches he believed that one day, he would also own the watch which had been his fathers.
Bonhams is pleased to offer this timeless legacy from one of the most knowledgeable watch collectors.